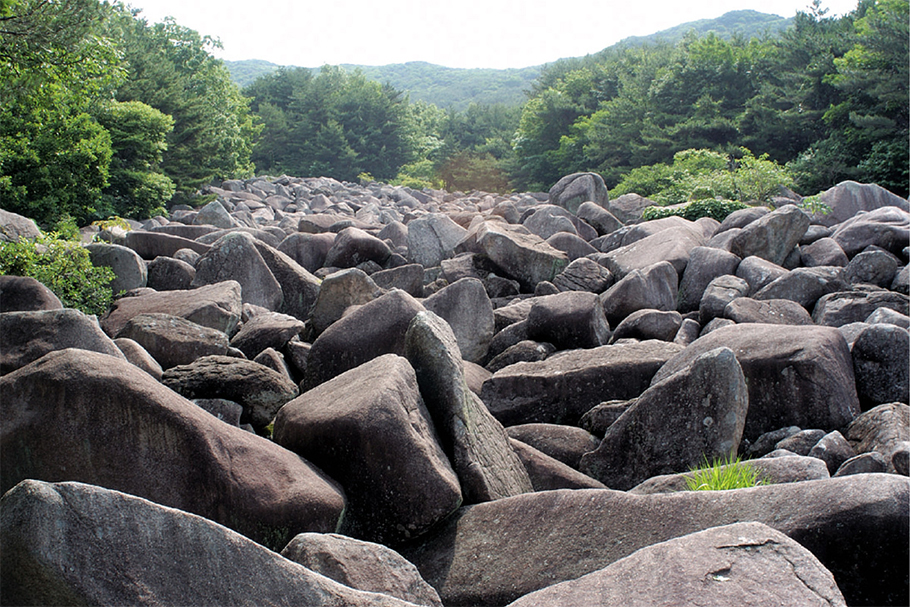 Blocks of round or square-shaped rocks and pebbles have been accumulating in large numbers on mountain slopes and valleys in this area for thousands of years. It is believed that those on Biseulsan Mountain were formed during the late periglacial period, which was about 10,000 to 100,000 years ago. Those on Biseulsan Mountain, which feature unique shapes, are huge blocks of granite that were formed during the Cretaceous Period of the Mesozoic Era. Large ones such as these are very rare to find in granite form, and thus researchers find them to be a very valuable resource.

On Biseulsan Mountain, the blocks of such rocks extend from a height of about 1,000m near Daegyeonsa Temple and across the hiking trail. Block streams start from two different places on the slope, converge at an elevation of about 750m, and stop at an elevation of about 450m. These block streams are 2km long, 80m wide (maximum), and 5m thick. The diameter of the rocks ranges from 1-2m, making them the largest of their kind in the country.

Near Daegyeonsa Temple, there are bizarre-looking rocks such as Bucheobawi Rock and Kalbawi Rock, and especially Kalbawi Rock shows evidence of having gone through the process of tor/talus formation. Diverse types of topography are found in the block streams in Biseulsan Mountain, and they were designated as Natural Monument No. 435 in 2003 in consideration of their research value.

* Talus : a group of sharp-edged rocks heaped in the shape of a fan that accumulate through the process of weathered rock pieces falling down from a steep slope (e.g. Kalbawi Rock)