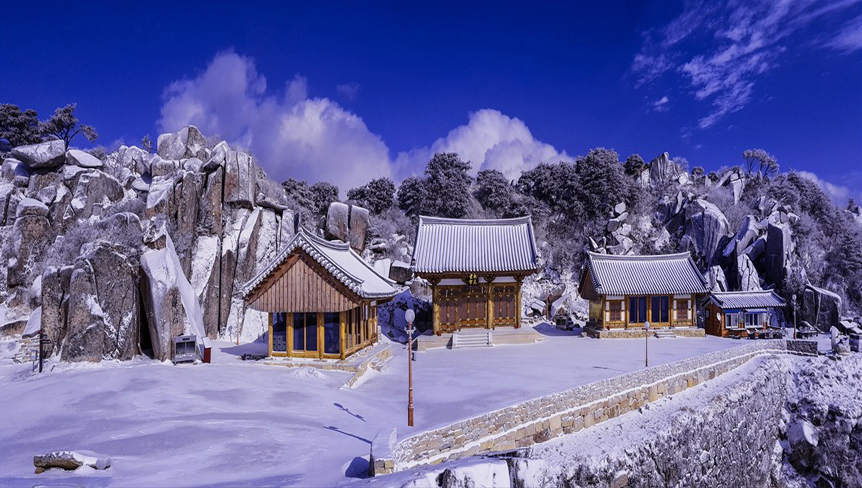 This temple is located at an elevation of 1,000m and distance of about 2km from Cheonwangbong Peak, the highest peak (1,084m) of Biseulsan Mountain. No records remain about the foundation of the temple. According to a legend, an emperor of the Tang Dynasty of China was looking for a good place to build a temple. One morning, he saw a beautiful spot reflected in the water of a wash basin and searched for it until he found this location. It is said that when Silla’s King Heondeok had this temple built in the 9th century, he named it Daegyeonsa (literally meaning “a temple that was foreseen by those in the large country (China)”]. It is also said that Monk Iryeon, who won first place in the state examination for monks in 1227 at the age of 22, was appointed as the first Chief Monk of this temple and served here for 10 years.

Little is known about the history of the temple after its foundation. The only remaining record about it is an entry written in Joseon Wangjo Sillok (The Veritable Records of the Joseon Dynasty) indicating that a stone Buddha statue at the temple shed sweat, and that the incident was reported to the central government on two occasions (1416 and 1423). It is also unclear when the temple was closed down. LEE Jaein renovated it to commemorate the naming of YI Eun as King Yeongchin in 1900 (fourth year of the reign of the Korean Empire’s Emperor Gwangmu), but the temple started deteriorating in 1908 (second year of the reign of the Korean Empire’s Emperor Yunghui), leading to its closure in 1917.

During an excavation survey of the temple site carried out in 2002, six units of what appeared to be building sites, corner stones, and convex/concave roof-end tiles were identified. The Chinese characters “大見寺” (Daegyonsa) inscribed on a concave roof-end tile unearthed there confirmed the name of the temple, which had been passed down only orally. Researchers also found that the original temple had existed until 1633 based on the years printed on roof tile pieces. Based on such discoveries, it is believed that the temple was founded during the Unified Silla Period or early Goryeo Period and repaired/renovated many times.

As for the huge stone embankment (37.5m long and 6.56m tall at the highest point) that still stands on the temple site, it is believed that it was built at the time of the temple’s foundation. On the east and west sides of the embankment, bedrock forms a cliff face. It is thought that the embankment was built to form a flat surface by connecting the cliff on the two sides. Currently, parts of the center of the embankment are protruding forward a little due to earth pressure. The technique of uncoursed random rubble masonry was used to build the embankment to maximize the natural appearance of the stones.

The Daegyeonsa Temple currently located at San 1-2 Yong-ri, Yuga-myeon, was completed in March 2014 after eleven months of construction and includes four buildings (Daegyeon Bogung Hall, Seondang Hall, Jongmuso Hall (administration office), and Sansingak (Shrine to the Mountain Spirit) (total floor space: 186m2/land area: 3,633m2) on the site. All that remains of the original temple is: a three-tiered stone pagoda, the stone embankment, a well, and a Buddha statue carved into the cliff face.